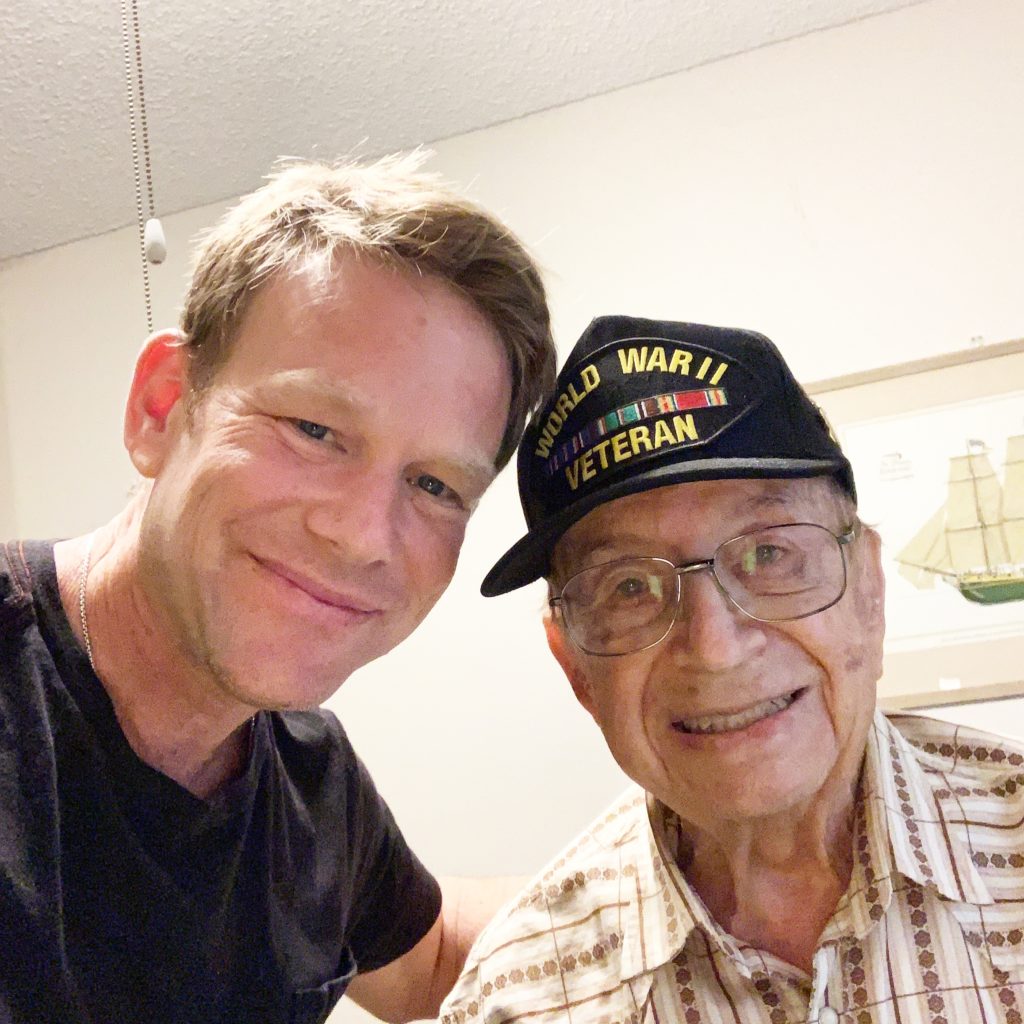 He is a decorated veteran.

His mind is sharp and he shares VIVID memories from every decade of his lifetime.

Joe took me through his nice months of combat in Europe during World War 2.

They crossed rivers in the pitch black of night.

The Germans were often well-entrenched, shooting at them from the other side of the river.

One out of every two soldiers Joe fought alongside did not survive.

Some just hid in their foxholes and didn’t come out.

Others shot off their own toes or fingers, in hope that a trip to the medic would help them avoid combat.

He said, “Dying is easier than living when you’re in combat.”

I asked Joe if he knew he had this courage within him?

“I knew I’d die here or die there. I figured there was no chance I’d survive the war.”

But he survived, and pressed on with his portable rocket launcher, 3 rockets, grenades, belt of ammo, and a backpack with 2 days of rations, a bayonet and a shovel.

Joe did not have a gratitude teaching to tie it all together with a pretty little bow.

When talking to these elders with such a prestigious and grizzly history, I remember that words and quotes and sayings are cheap, something anyone can cut and paste.

Here’s what I did learn from Joe, whose wife died 10 years ago, and yet he is still going strong.

He lives with his baby brother who is 91.

They obviously have good genetics. They credit their diet of olive oil and homemade red wine.

And Joe LOVES to go dancing, especially when accompanied by younger women.

He said, at this point in his life, when he wears his World War 2 uniform, he is a celebrity.

Joe recently met two younger woman at a veterans event, and they took him out for a night of dancing.

I left this meeting with Joe’s favorite “swing music” playing in my car, imagining the incredible thought of a 100-year-old dancing his heart out!

To spend an hour with any combat veteran, let alone a decorated WW2 centenarian, changes the definition on “value of life.”

It’s not something that usually comes up in conversation and is rarely something one recognizes until their very life comes into question.

When I got together with some of my best college friends last week, we watched the NCAA Tournament, talked about fitness trends, business investments, mutual friends who are struggling, friends who are thriving.

Maybe this sounds like a conversation you’d have with your friends?

There was no “value of life” in the conversation.

And it might have been awkward if someone were to suddenly say, “Dude, how about this? We are lucky to be alive.”

Therein lies the value of the Joe Pietrofortes of the world.

In his book War, Sebastien Junger writes, “Combat isn’t where you might die — though that does happen — it’s where you find out whether you get to keep on living.

“Don’t underestimate the power of that revelation.

“Don’t underestimate the things young men will wager in order to play that game one more time.”

You get to keep on living.

If that doesn’t resonate…

Imagine voicing your everyday complaints to Joe’s best friends…many of whom perished on the European battlefields, right in front of his eyes.

If it still doesn’t hit you in the heart…

Yesterday I visited my friend who has been in ICU, fighting for his life, every second of everyday, for over a month!

He has 2 young children. His road to recovery will be months and even years into the future.

When asked if he is depressed, he said, “No. I’m fighting to survive so that I can be a parent to my children.”

Consider parenting, not as a hassle, but as a privilege.

You get to keep on parenting.

You get to to keep on running, stretching, breathing.

You get to keep on dancing.

There will come a day when you can’t do this stuff anymore.

God wiling, it’s a day in the very distant future.

But as Joe or my friend in ICU might tell you, that day can come any second.

So fill in the blank.

Oscar Wilde said, “To live is the rarest thing in the world. Most people just exist.”