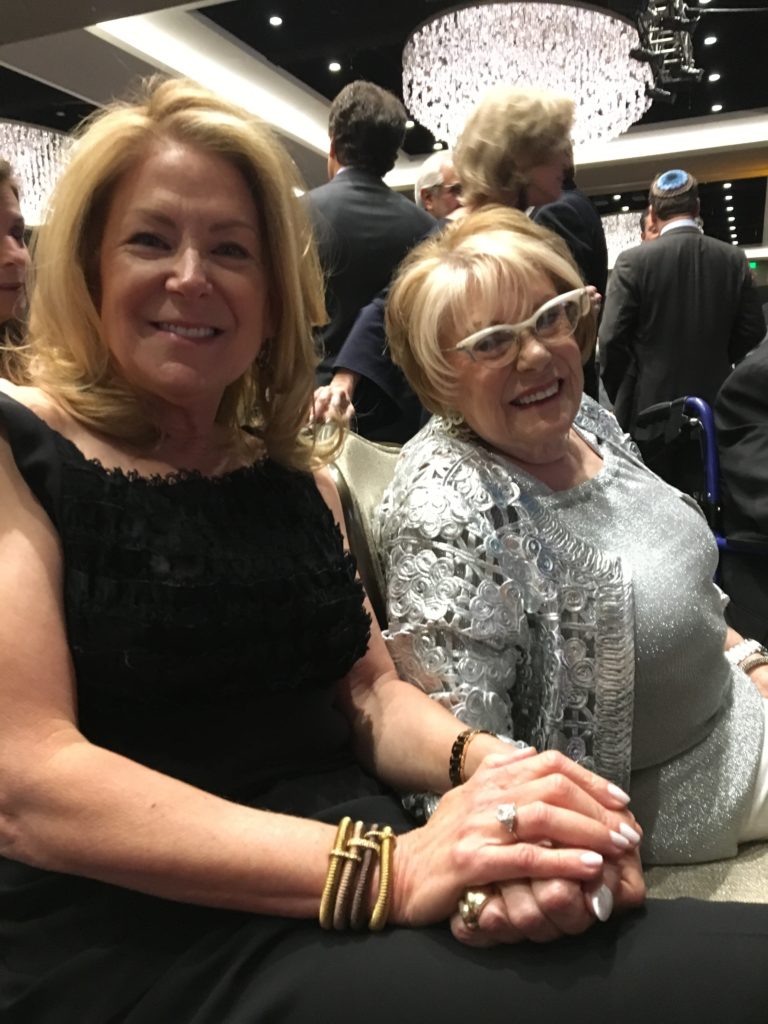 Pittsburgh And A Survivor

It’s been six days since the shooting in Pittsburgh.

Tonight, I’m going to Shabbat services at my synagogue.

I’m wondering, “Is this gonna be dangerous?”

Any unusual sound will be alarming. People will be on edge.

This isn’t the first time the most civilized country has trended toward darkness.

A few days before the shooting in Pittsburgh, I interviewed an 85 year-old Holocaust survivor, Ruth Steinfeld (see above pic of Ruth and her daughter)

Ruth shared with me her first memory.

She was five-years-old, having dinner with her family in Ladenberg Germany, on the night of November 9, 1938.

“The Nazis came into our home and broke everything.

“They burned the synagogues and broke all the storefronts of the stores owned by Jews.

That’s why it’s called Kristallnacht, the night of the broken crystal.”

A short time later, Ruth and her family were taken to a concentration camp in France.

A representative from an organization called OSE (Oeuvre de Secours aux Enfants)…snuck into the camp and pleaded with Ruth’s mother to let them save her children.

“OSE somehow got into the camp and they told my mother if she would let us go, they’d do all they could to keep us from any harm.

“I must have had an unbelievable mother because she put us on the bus. Here we were screaming and crying but she insisted.

“If you have little children you know how hard this must have been for her.

“That’s the last time I saw my mother, waving goodbye from the back of the bus.”

Ruth’s parents were killed in Auschwitz and Ruth’s identity was changed by OSE.

You can imagine her fear, an 8 year-old without parents, alone in the world.

Just a few months prior, she was in a beautiful home with her loving family in a modern European country. What the hell happened?!

Through the rest of the war, Ruth was protected by friendly Frenchmen in small “off-the-grid” towns in the countryside.

All of their lives were constantly at risk.

If the Nazis found even one Jew being hidden in one of these small towns, everyone in the town was killed.

Over 1.5 million Jewish children were killed during the Holocaist.

Ruth was one of the lucky ones. After the war, whe emigrated to Texas, got married, had 3 children and 10 grandchildren.

But there was great pain in growing up without parents.

So in 1981, Ruth found the courage to return to Germany and the home where she last saw her parents.

An old lady answered the door to her former home.

It was a profoundly emotional moment, which I cannot describe in words.

Please listen to the new episode of my podcast, 18 Minutes and hear Ruth tell her story firsthand.

Ruth shares a story of forgiveness, and how pain can go away. It is possible.

My interview with Ruth took place a few days before the shooting in Pittsburgh.

A few days after the shooting, I again called Ruth.

She was very distraught.

She told me. “I came to America and it was a free country, and this was never going to happen. And it happened.

“I find it to be very difficult to explain. It’s the sort of thing that never in my life, after World War II, I would have to encounter.

“These were wonderful people [in Pittsburgh] who were praying. I just can’t believe this happened.”

Where do we go from here?

Here you have a Holocaust survivor who found it in her heart to forgive, to release the pain…and now…

…has she, have we… returned to a world of pain and darkness?

Earlier this week, someone recommended a documentary, The Lady in Number Five.

It’s the story of another Holocaust survivor. Alice Herz-Sommer.

When Alice died in 2014, she was 110, which made her the oldest Holocaust survivor in the world.

Alice was a super talented concerted pianist and a rising celebrity in Europe in the 1930s.

Then, HItler came to power, and Alice was sent to a special concentration camp for Jewish intellectuals and celebrites.

The Nazis would bring the Red Cross representatives to this special camp in order to show that the situation of the Jews in the concentration camps was “good.”

Alice, along with 100 other Jewish musicians, would play concerts for the Red Cross representatives.

The room was filled fellow prisoners and Nazi Guards.

Alice said, “The prisoners lived for the music. It was like food to them. If they hadn’t come [to hear us], they would have died long before. As we would have.”

“Music saved my life and music saves me still.”

Just as there will always be always darkness, so will there always be music.

Next week is the 80th anniversary of Kristallnacht. Ruth is traveling to Germany to share her story and her memories.

In the face of all Ruth has been through, at 85, she continues to rise up and spread her beauty amidst all this darkness.

…and no matter how dark it gets, we will forever hold OUR light, and play OUR music, and speed OUR love.

**TO HEAR THE RUTH’S STORY FIRSTHAND, check out the new episode of my podcast, 18 Minutes