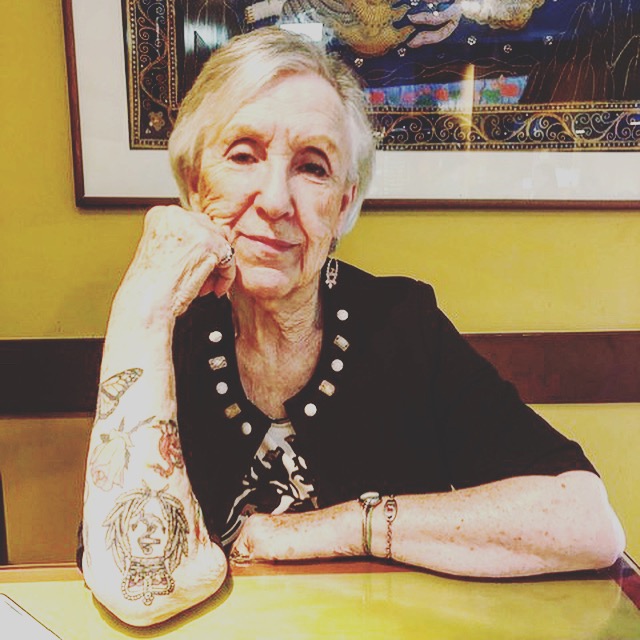 Whether or not you watch Game of Thrones, let me tell you about the real “Dragon Lady.”

She grew up in England, where she was bombed out three times during World War 2.

Homeless and literally shell-shocked, Yvonne hid in her cellar.

There were times she was outside with friends and could not get to a bomb shelter in time. She saw a few of her friends die in front of her eyes.

Those few neighbors whose homes were not destroyed offered Yvonne safe shelter and food.

She felt such a debt of gratitude to these kind humans that she decided to commit her life to helping others.

In 1968, she moved with her four children to America and became a bereavement therapist and addictionist.

For 18 years, she had a radio show, Two Way Talk, and one day, received a phone call from an organization called Compassionate Friends.

It’s an organization that helps bereaved parents. They asked Yvonne to come and speak. She has worked with them ever since.

Yvonne said there are so many kinds of grief she deals with. It’s the worst of the worst.

Yvonne is the one who is called into ground zero… triage… for people enduring impossible pain after the overdose of a child or a homicide.

Only in the last 3 or 4 years did she stop running out at midnight as a crisis worker.

She would be the first on the scene to be with families of a homicide or do interventions with addicts.

To this day, at 85, Yvonne is a grief therapist working in Bucks County Pennsylvania. She is on the front lines of the opioid crisis.

She trains staff at recovery centers on what to do when a patient relapses.

And she councils families who have lost a family member from an overdose.

Yvonne told me stories that I can’t…that I won’t…share with you.

It’s too hard to even think about.

But the fact that she is out there…with her storied past and her mystical strength and impossible courage…I didn’t know people like her existed.

To see and feel this kind of grief once, let alone constantly?!

I asked how she handles all the pain.

“It takes a big chunk out of me. It’s horrific. But early childhood trauma gave me the ability to communicate with people in the throes of grief.”

This might explain some of her tattoos, particularly her tattoo of a dragon.

“People call me the Dragon Lady, which means ‘Don’t mess with me. Don’t tell me i can’t do anything.’”

She also has a bumblebee tattoo.

“The bumblebee… aerodynamically it’s not supposed to be able to fly but nobody told it. That’s been my attitude.”

I have to be honest in saying that I interviewed Yvonne two times.

The first time, we barely cracked her story. And I never wrote about her because I wasn’t sure what to say.

But Yvonne has an amazing son who followed up and said “Dave, when you are writing the piece about my mom? My mother is an amazing person, full of kindness and light, so it is terrific to see her recognized like this. Thank you!”

That was my kick in the ass to reconnect with Yvonne, and that’s when her full story reared its Dragon head!

I am so grateful to have met, not just Yvonne, but also her son Daniel who spends his life fulfilling the wishes of elders.

If you talk to him, you would realize, there aren’t a lot of people like Daniel. He’s truly dedicated.

It’s a testament to his mother, a total badass who also knows how to have fun. That seems to be the formula for the type of mom who raises strong children.

She loves Bowie, Queen, and Phil Collins and shares this music with her patients in recovery.
She said, “The song ‘Don’t Lose My Number’ is especially relevant for a recovering addict.”

“Billy, Billy don’t you lose my number
‘Cause you’re not anywhere
That I can find you”

Yvonne also leads bi-monthly workshops at Gilda’s Club, a worldwide cancer support community, inspired by Gilda Ratner. “Even in excruciating pain, we laugh with each other -when nothing seems funny, and when it is.’ “

Dr Yvonne Kaye is woman who has lived through the worst of humanity during WW2, and instead of hiding from the pain, she walks toward it…everyday.

To anyone who has been through loss…

to everyone who is blessed with life…

as Yvonne said, “You miss out if you take things for granted.”